Skip to content
Latest News
Finally, here’s a secret weapon to use against all those despicable robocallers
5 tax credits you don’t want to miss out on this year
The Galaxy S20 is the first high-refresh display phone many people will own

One of the strongest storms in recorded history to hit the US has battered north-west Florida, flooding homes, washing out beaches and snapping trees.

Rescue services are beginning to assess the full impact of Hurricane Michael, which made landfall on Wednesday afternoon as a category four storm with 155mph (250km/h) winds.

At least six people have been killed, most of them in Florida.

Having weakened to a tropical storm, Michael has been hitting the Carolinas.

Storm-surge warnings are still in place, the US National Hurricane Center says, and residents across the southern US have been warned of the continuing danger from downed powerlines, flash floods and landslides.

There are fears for people who ignored evacuation warnings in some of the areas now flooded.

Hundreds of thousands of homes and businesses were left without electricity in Florida, Alabama and Georgia. 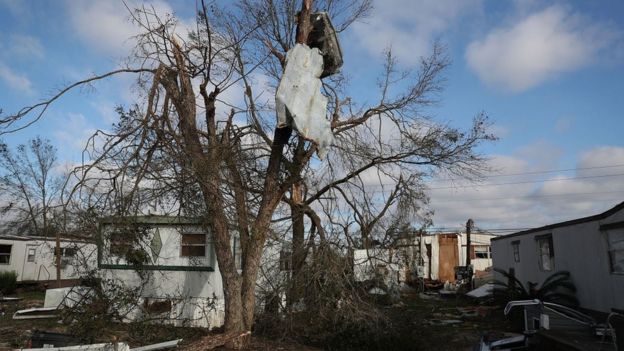 It ranks among the most powerful hurricanes to hit the US in terms of wind speed and barometric pressure, comparable to Hurricane Andrew in 1992. 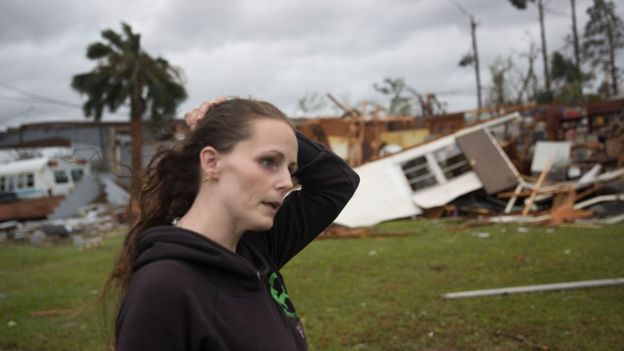 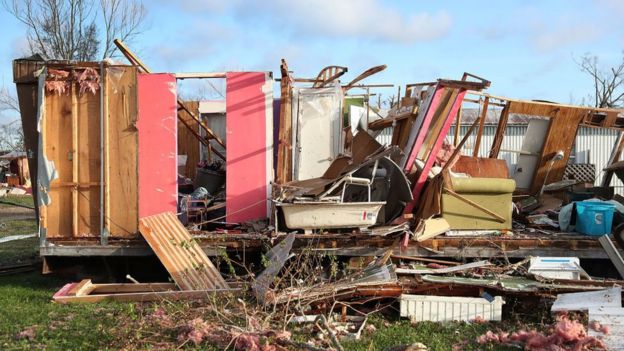 Michael was so strong as it swept into Florida that it remained a hurricane for hours as it moved further inland, before being downgraded to a tropical storm.

Its rapid intensification caught many by surprise, although the storm later weakened.

Unusually warm waters in the Gulf of Mexico turbo-charged the storm from a tropical depression on Sunday.

On Tuesday it was still a category two hurricane but by Wednesday morning it had reached borderline category five, the highest level.

Who are the victims?

Florida officials say at least four people died as a result of the storm in Gadsden County.

In Seminole County, Georgia, a metal car-shelter lifted by a gust of wind hit a mobile home, killing a girl of 11.

And a man died when a tree fell on his car near Charlotte, North Carolina on Thursday.

Michael earlier reportedly killed at least 13 people as it passed through Central America: six in Honduras, four in Nicaragua and three in El Salvador.

How badly was Florida hit?

The storm has knocked out power to more than 900,000 homes and businesses.

More than 370,000 people in Florida were ordered to evacuate but officials believe many ignored the warning.